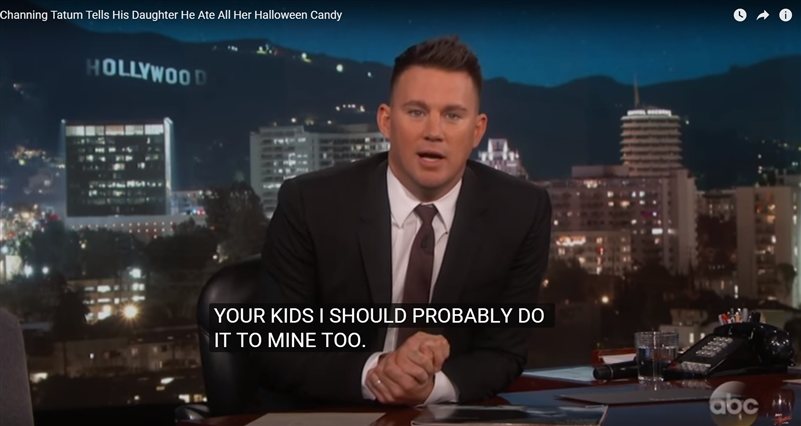 Guest Host Channing Tatum Plays the Classic "I Ate Your Halloween Candy" Prank on His Daughter.
Photo by: The Jimmy Kimmel Show, via YouTube.

While guest hoasting Jimmy Kimmel Live this November 1st, Channing Tatum shared with everyone that he too, participated in the "I Ate All of Your Candy" Halloween Prank that Jimmy Kimmel has been encouraging parents across the country to play on their kids for years now.

Since he was guest hosting the show this week, Tatum thought it was "only fair" that he played the same Halloween Prank on his for year old daughter, Everly, that the show was asking viewers around the country to play on their own kids. As audience members audibly "Awwed" at the idea of him tricking his four year old, he warns them to wait and watch the video before cooing over it.

The video starts out like all of these "I Ate Your Halloween Candy" Prank videos do - Channing tells his daughter that he accidentally ate her candy last night, because he was really hungry. But unlike Kimmel's daughter (yes, he too pranked his own daughter this Halloween), who was completely unbothered at first, or many of the "I Ate Your Candy" Kids from over the years, who reacted with quiet rage, Tatum's daughter just walked away with her head down, and silently began to cry.

He tried to egg her on a little, but he cracked after about 10 seconds of his daughter crying over her lost Halloween Candy, and ran across the house to grab the candy, which was safely hidden in a box, and tells her that he was just "pulling a joke" on her. She tells him over and over that it was not funny, and seems unimpressed with his answer that it was just a joke, and after the clip aired. Tatum apologized to his daughter numerous times on air, saying that he hopes she forgives him one day for the prank.

Did You Watch Channing Tatum's "I Ate Your Halloween Candy" Prank?
Let Us Know Your Thoughts in the Comments Below!