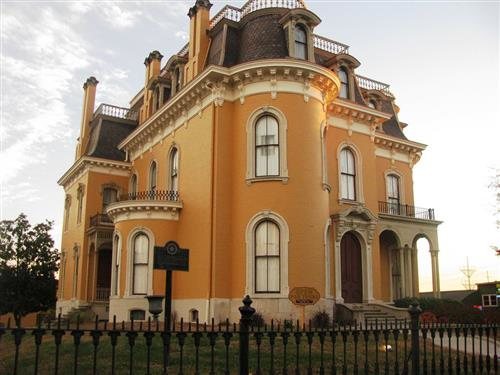 The Culbertson Mansion was built in 1867 by William S. Culbertson and it cost just $120,000 to build during that time and it is believed to be haunted. Witnesses have reported hearing doors shut by themselves and footsteps upstairs while no one is up there. The mansion's carriage house burned down in 1888 during a lightning strike, killing all who were inside. Many believe that those who died here are the ones who linger the place to this day. There have been unpleasant smells, clanging sounds, and a dark man's apparition. All of these were repeated occurrences in the 1990s when the Webb family and Dr. Webb's office occupied the building. The hauntings continued until Dr. Webb began to lose his patience, and his patients, many of whom went missing. There was a period of inactivity at the house and investigators from the local police went to the place to find it abandoned and Dr. Webb's entire family was violently murdered in every room. They found Dr. Webb's torture chambers in the basement, where he did unspeakable acts to his patients. After this, the mansion was boarded up for 30 years, until the American Legion purchased the property in the 1940s. Witnesses say the place is haunted and that there have been electrical problems in the home, missing objects, eerie noises after closing and dark shadowy figures that walk throughout. Sometimes during the Halloween season, the Carriage House is open as a haunted houe attraction.