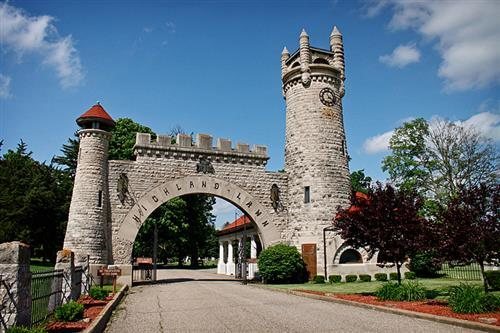 This cemetery has a couple different ghost legends surrounding it. One story is about Stiffy Green, a phantom bulldog, who belonged to a likeable elderly man named John Heinl. The friendly bulldog was named for his stiff gait and bright-green eyes. When its owner Heinl passed away in 1920, Stiffy Green refused to leave the mausoleum and was eventually found there dead, although people brought him water and food to keep him healthy.

The people in the town raised funds to have Stiffy Green stuffed and placed inside the tomb. Once the bulldog was placed, the cemetery caretaker began hearing barks from inside the mausolem. Both Heinl and his dogs apparition have been seen, along with the phantom smell of John's pipe.

Another story that surrounds this cemetery is that of Martin Sheets, a businessman in the early 1900s who had a serious fear of being buried alive. Because of this, he decided to have a custom-designed casket with latches on the inside so no such thing could ever happen to him. When he passed, he was entombed in his mausoleum. Although nothing eventful happened, Sheets had paid for the phone to remain in service for years. Years later, his wife was found dead of a stroke, clutching the phone, possibly trying to call for help. When she was entombed, they noticed that the telephone inside the locked mausoleum was off the hook.