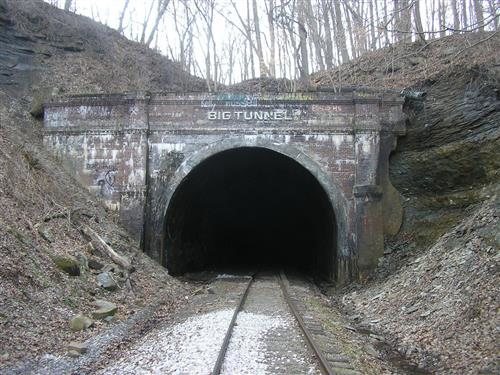 The Tunnelton tunnel was built in the mid-1800's and is believed to be haunted. Although stories change from person to person, one thing is for sure - there is some strange activity that takes place in and nearby to the tunnel.

An apparition of a man with a decapitated head is believed to exist here. Witnesses have heard screams with rumors that there was a graveyard atop the tunnel and when construction was happening bodies fell through to the tunnel. The ghostly man is said to wander with a lantern in one hand, and his head in the other.

Another local legend says a family was killed long ago when their horse and buggy crashed into the river down the hill. People have reported hearing the screams of the ghostly family.

A third story surrounds a former cemetery that sits above the tunnel. Rumors say that a construction worker was cutting into the tunnel when caskets fell through. This is another reason as to why so many could have spotted eerie activity here.

Henry Dixon - An additional story about the tunnel includes the murder of Henry Dixon, whose body was supposedly brought to the tunnel to be destroyed when a train came plowing through. Locals believe Dixon's spirit lingers at the tunnel.

The entrance to the Tunnelton Tunnel!
Source: w.marsh via Flickr